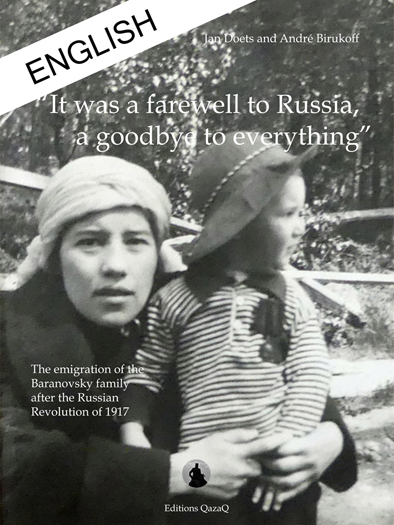 In the night of the 25th of October 1917 (7 November according to the Gregorian calendar of today, the communist revolution broke out in Russia, removing the provisional government of Alexander Kerensky. This new book follows the emigration of an important Russian family named Baranovsky, from 1917 onwards, one hundred years ago.

Jan Doets did his research about this family since 2012 and found family members in the United States, England, Ecuador, France and Russia. Finally, in France, he found André Birukoff, a Baranovsky descendant via his grandmother Elena Birukoff-Baranovsky. He had inherited family papers from her. He translated them from the Russian and thus found the missing links of Jan’s story. Combining Jan’s and André’s efforts has led to a passionate book. Their research has also clarified a personal mystery about Alexander Kerensky.

Alexander Fiodorovitch Kerensky has been one of the major actors during the Russian Revolution. He was the one who took Russia on a revolutionary course. But, just like a sorcerer’s apprentice, he in fact opened the way for the Bolsheviks’ rise to power. They removed him in order to install a police state even more totalitarian than that of the czar.

Alexander Kerensky – ephemeral prime minister of an even more ephemeral democratic government – is , between the lines, one of the most important characters of this history of the Baranovsky family to whom we have dedicated this book. We discover him under lighting rarely used : a man not only swept by the whirlwind of events in his country, but also by the tempest of feelings he had for a young woman with whom he was passionately in love.

Swept from power by Lenin and Trotsky, Kerensky has dragged along the Baranovskys in his fall from power and like so many Russian families of the period they could only say : “Farewell to Russia, farewell to everything”, as wrote at the end of a newspaper article Olga Kerensky-Baranowsky, who was his legitimate wife and cousin of the young woman with whom he was in love.

Like the Baranovskys, the Kerenskys and so many other families who have known a similar fate, have been sacrificed mercilessly on the altar of the revolution of which we measure, one hundred years later, the immense mess it has produced.

Retracing their lives let us, no doubt, somehow fetch and understand this revolution on a daily basis, at the dimension of a human being.

Like Jan Doets, André Birukoff has had an international career. Born 9 January in Boulogne, France. After studying Economics and Russian, he worked, until his recent retirement, at Agence France-Presse, the French news agency, leading a life which let him satisfy his love of journalism, discovery and adventure. He was a correspondent in Russia (then the URSS) and he was AFP’s bureau chief in Cuba, Colombia, Mexico, Serbia and Portugal.
Literature and history are his favourite pastimes. His father being Russian, he is particularly interested in the history of the Russian revolution and that of Soviet Russia.

I wish you good and adventurous reading !

5 réflexions à propos de “ The Russian Revolution took place one hundred years ago – Editions QazaQ commemorate by publishing a unique book: “It was a farewell to Russia, a goodbye to everything” ”